Our Annual Gathering of Presbyterian Women was held at Memorial Presbyterian Church in St. Augustine, Florida.  How appropriate to meet in this historical church and city.  We were welcomed by Susan Delpit, PW Moderator of Memorial Church and Dr. Dudley Weaver, Pastor. Rev. Amy Lehr Camp, Parrish Associate greeted Presbyterian Women “who traveled from the North and from the South…from the East and from the West” as “Daughters of the Light.”   Two hundred seventy-three women joined to worship together.  Though it was cold outside our “Abiding Hope” through the Ages warmed our hearts and souls.  We responded with “Amen” led by the Memorial Vivace Ensemble.

Ruthanne Reiss, Moderator 2012-2014 opened the 26th Annual Gathering business meeting by praising her PWPCT. Our Purpose was repeated in unison.

Jennifer King, “Together In Service” program coordinator was introduced by the moderator to update our present project which began last year with the collection of 803 “Dresses for Little Africa.”   This year as women from the gathering called out the number of dresses their women sewed an additional 778 dresses and britches were collected.  Our women then gathered $300.00 to defer the cost of mailing their gifts.

Our newest Justice and Peace project was adopted in 2013 which highlighted the issues of violence against women and girls.  Orange ribbons made by Lakewood PW were passed among the women to be worn each on the 25th of the month to bring community awareness to this issue.

This past year, PW celebrated a twenty-five year birthday.  A birthday which would not be held without past leaders in our Presbytery.  Ten of these women were in attendance to inspire and support our missions.

Ruthanne recognized several special award recipients then.  First to twenty-six women and a husband and wife who received “Honorary Life Members.”  Four “middler” students from St. Augustine Presbytery who are in seminary shared $3000.00 in scholarships from the Kay Beckman scholarship to assist with their educational needs.  Then during this past summer Savannah Page a member of Mandarin received a “Teen Girl Leadership” scholarship at Montgomery Camp.

To acknowledge the Celebration Giving this past year three “Augie” awards were presented.  First, Memorial PW members, church and staff for their hospitality during this event.  Sandra Hedrick was recognized for her personal support of PW in their efforts to “spread the word” during our Presbytery meetings.

The third “Augie” was given to Steve Benz, Transitional Executive Presbyter who suggested we submit our story of “Little Dresses” to the Mission yearbook.  That mission is now published.

A message from Ann Barnwell, PW Synod Moderator of South Atlantic which addressed “The Vision of PW” was presented in a “reader’s theater” directed by Gayle Bone, PWPCT member.  This reading defined who we are and what we do to support our missions.

Our business meeting concluded with Rev. Glen Busby, Patti’s pastor from Branford Presbyterian Church installing twelve women to the PWPCT for 2014.  So here we are Lord ready to serve.

Our afternoon session gave women an opportunity to hear from representatives of the missions we support.  Questions were answered by representatives from Columbia Friendship Circle, Kay Beckman Seminary Scholarship, Mission Haven, The Duvall Home, Thornwell Home for Children and Montgomery Presbyterian Center.

This year we say a special thank you to Ruthanne Reiss, Moderator 2012-2014 who has served with deep devotion to the purpose of Presbyterian Women.  And to Carrie Milligan who served as program coordinator of Justine and Peace.  These women define the gift of serving others.

Our session closed in prayer from Patti Phillips, Moderator of St. Augustine. 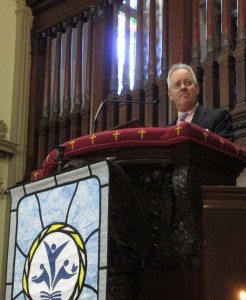 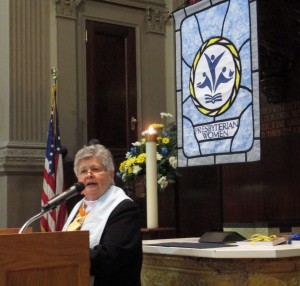 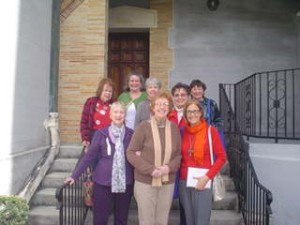